We are facing a national emergency with the COVID-19/Coronavirus epidemic, and do NOT need to use precious taxpayer dollars for special interest “Pork Barrel” spending. After careful review of recent budgets, most things (Medicare, Social Security, Defense, etc.) CAN'T be cut much—or at all. ( ..!!.. )

The Register, cache-2: https://GordonWayneWatts.com/proof-read___Letter-to-the-Prez_ATTACHMENTS_PDF.pdf << (See page 83ff of The Register's cache for summary, as linked here.)

Only ONE (1) 'sizable' thing we can cut in the current budget in outlays, e.g., spending: STUDENT DEBT, which comprises almost TEN (10%) PERCENT of total U.S. Debt, almost $2 Trillion ÷ $20 Trillion or so: “Today, FSA's [student debt] portfolio is nearly 10 percent of our nation's debt. [] Stop and absorb that for a moment. Ten percent of our total national debt.” Source: U.S. Dept of Education, Sec. of Education, Betsy DeVos, 11-27-2018 speech

Or: https://gordonWAYNEwatts.com/DeVos-speech_11-27-2018_PDF.pdf Conservatives have, for years—for decades—have complained about excess spending of taxpayer dollars to make or guarantee student loans: “If anything, increases in financial aid in recent years have enabled colleges and universities blithely to raise their tuitions, confident that Federal loan subsidies would help cushion the increase.” Source: “Our Greedy Colleges,” By Dr. William J. “Bill” Bennett, former Secretary of Education under President Ronald Reagan, The New York Times, 18 February 1987, LINK: https://www.NyTimes.com/1987/02/18/opinion/our-greedy-colleges.html

More recently, Conservative advocate Gordon W. Watts made the same calls for sanity: “Congress should pass a bill reversing the obscene increases in college loan limits as allowable by the College Access and Opportunity Act of 2005, a bill introduced by former Speaker John Boehner, which was the cause of this crippling and massive college debt, and benefited only the banks and universities. [] When colleges and universities knew students could take out “deep pockets” loans, they jacked up tuition in response to the additional money available, thereby fueling tuition inflation and proving former Education Secretary Bill Bennett’s hypothesis: When you subsidize anything, price goes up.” Source: "A Polk Perspective: Fix our bankrupt policy on student debt," By Gordon Wayne Watts, Guest columnist, The Ledger, August 04, 2016, LINK: https://www.TheLedger.com/opinion/20160804/a-polk-perspective-fix-our-bankrupt-policy-on-student-debt FAIR USE

“My prior column documented Ross’...opposition for use of tax dollars to make or guarantee said loans. But he never introduced legislation for [this]. Where has that gotten us? [] Collegiate debt, now almost $2 trillion, is almost 10 percent of total U.S. debt. I predict we will crash the U.S. dollar if we ignore “crazy Gordon” one more time.” Source: "Polk Perspective: Rescue taxpayers from mounting student debt," By Gordon Wayne Watts, Guest columnist, The Ledger, November 16, 2018, LINK: https://www.TheLedger.com/opinion/20181116/polk-perspective-rescue-taxpayers-from-mounting-student-debt

“On Nov. 16, 2018, The Ledger published my column decrying skyrocketing tuition and mounting student debt, paid for by our tax dollars. [] Apparently, in response to my column, U.S. Secretary of Education Betsy DeVos, in her speech 11 days later, repeated my complaints that “collegiate debt, now almost $2 trillion, is almost 10 percent of total U.S. debt.” I quote her: “Today, FSA's [student debt] portfolio is nearly 10 percent of our nation's debt. Stop and absorb that for a moment. Ten percent of our total national debt.” [] Apparently, this chain reaction even influenced the president to fall in line with conservative spending cuts: Forbes reported on March 19, 2019, that “Trump proposes limits on student loan borrowing.” [] Despite even getting the president's attention, nothing has changed. Lawmakers didn't grant his request, and President Donald Trump, distracted by other issues, has dropped this. Based on that, I maintain my initial prediction of a crash of the dollar if lawmakers refuse to cut

Moreover, I can assure you that our GOP Lawmakers have seen my columns—multiple times (not counting my calls to their office to ask them to please grant President Trump's much-needed spending cuts request), and here is but one example, which was acknowledged by my Congressman's staff in this Sun, Dec 8, 2019 at 4:58 PM email:

I asked my GOP lawmakers to grant Trump's spending request in my letter above, and in this letter to Rick Scott's office, dated Thu, Mar 12, 2020 at 4:57 PM:

Yet, even after years (decades) of repeated warnings regarding overspending, NONE of my GOP lawmakers (with one partial exception) have heeded my warnings, acknowledged my requests, or enrolled legislation to the request of President Trump (and numerous other Conservatives). The sole exception was Rep. Ross Spano (R-FL-15), my Congressman, who, in “invited me to a personal one-on-one meeting July 30, 2019, as he has with other constituents. In attendance were myself, Rep. Spano, and two senior staff, Blaine Gravitt and James Jacobs. We spoke for 30 minutes about unfinished business in higher education.” Source: "Polk Perspective: Offer relief for taxes dressed up as ’loans’," By Gordon Wayne Watts, Guest columnist, The Ledger, November 19, 2019, linked above. Representative Spano asked me the bill number for Trump's spending cuts bill, but as no lawmaker had enrolled it, there WAS no bill number. More recently, when we spoke at the 2020 Strawberry Festival parade in Plant City (Fla), he said he would look at the Higher Ed budget Trump submitted—which was good, but too slow, in my humble opinion—to put an abrupt halt to rich, Liberal colleges and banks getting huge, Pork Barrel corporate handouts in the form of student loans made or backed by taxpayer dollars—which DON'T help students (they raise tuition to match increased borrowing abilities) and DON'T help taxpayers (as we can't afford to throw good money after bad—almost TEN PERCENT of U.S. Debt is Student Debt).

IN LIGHT OF THE COVID-19/CORONAVIRUS NATIONAL EMERGENCY, such wasteful Liberal Pork Barrel spending is even MORE dangerous, and needs to STOP.

I make this petition to ask true Americans and genuine, honest Conservatives EVERYWHERE to join my voice in calling for our GOP delegation of Federal Lawmakers (U.S. Senators & Members of Congress) to STOP Liberal “excess spending like a drunken sailor.” (Apologies to all drunken sailors...for the comparison!) BUT—before I make my petition for a SOLUTION, proper, it is only logical to ask “why” there was/is a PROBLEM, so here are my top-3 guesses:

CONCLUSION: Regardless of your views on my novel theories above, if you're a true Conservative, then please “sign” my petition as described below, and if you don't support President Trump's spending cuts requests (by your actions, not mere 'words'), then you're not a Conservative—only a RINO (Republican in Name Only) fake, and need to leave, and never come back. – It's your move...

Contact your Member of Congress https://www.House.gov/representatives/find-your-representative and your U.S. Senator https://www.Senate.gov/general/contact_information/senators_cfm.cfm and [[#1]] CALL, and [[#2]] email them, and [[#3]] contact me to let me know of your results, and [[#4]] SHARE this petition, asking others to do the same. Here are four (4) examples—and you may also contact them on social media:

Was the ONLY non-lawyer permitted to file in the recent “Gay Marriage” case:

[Note: Watts is not running for office; this is an archived page.]

FISCALLY CONSERVATIVE: Calling for both tax and spending cuts in this petition and elsewhere.

CONSTITUTIONALLY CONSERVATIVE: Supports ALL of the U.S. Constitution—in this petition & elsewhere—not just the “popular” parts.

IN THE UNITED STATES DISTRICT COURT FOR THE NORTHERN DISTRICT OF ILLINOIS, EASTERN DIVISION

PRO-TRUMP: * “So, you think you know the real Donald Trump?”

Now, quit staring at my credentials, and get in touch with your Federal Lawmakers—early and often—being polite BUT FIRM in DEMANDING TRUMP'S SPENDING CUTS BE ENACTED INTO LAW!!.. and let me know your progress. WARNING: If we don't stop EXCESS LIBERAL PORK-BARREL SPENDING, then we will [[a]] CRASH THE DOLLAR; and, [[b]] be unable to fund genuine, unexpected, emergencies, such as the COVID-19 Coronavirus emergency—or any other funding needs that arise.

You may contact me as follows: Gordon Wayne Watts, Editor-in-Chief, The Register, a Christian and Conservative blog

Flagship mirrors of The Register: http://GordonWatts.com and https://GordonWayneWatts.com G.W. Watts///

LINKS to this page—Stable PDF format: 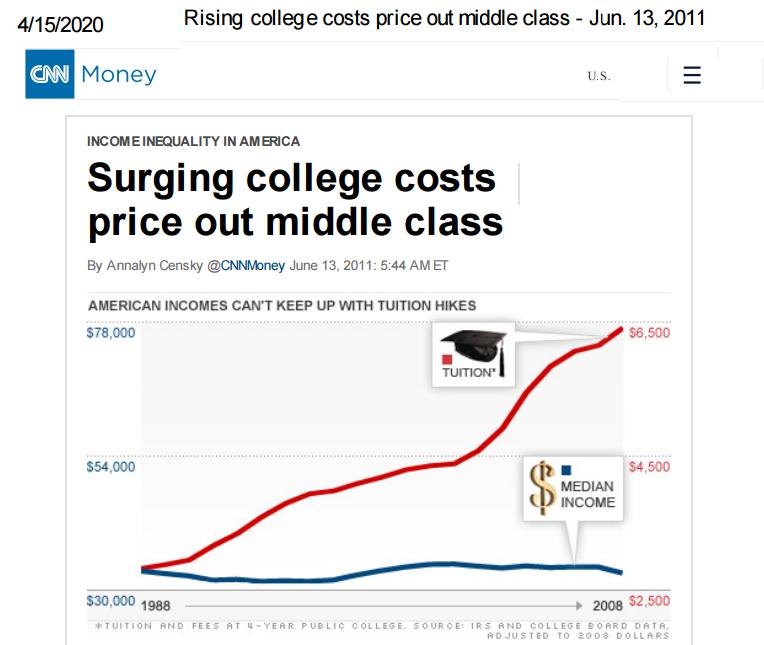 NEW YORK (CNNMoney) -- What do you get when college costs skyrocket but incomes barely budge? Yet another blow to the middle class.

The numbers confirm what most middle class families already know -- college is becoming so expensive, it's starting to hold them back.

The crux of the problem: Tuition and fees at public universities, according to the College Board, have surged almost 130% over the last 20 years -- while middle class incomes have stagnated.

NOTE: That article was from 2011 – it is much worse now!.. Tuition increases because lawmakers refuse to reduce spending, as Pres. Trump requested and colleges blithely raise prices, confident that federal subsidies – paid for by our tax dollars – will make this possible!

See also this graph used under Fair Use from MyBudget360: 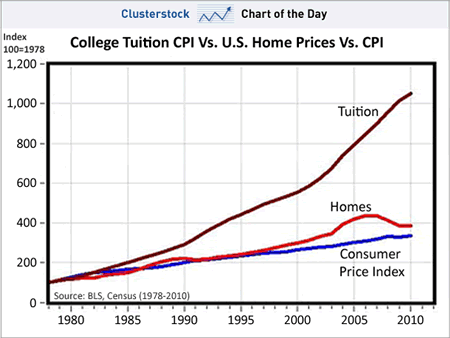 ource: “Is college worth the money and debt? The cost of college has increased by 11x since 1980 while inflation overall has increased by 3x. Diluting education with for-profits. and saddling millions with debt.,”Posted by mybudget360 in banks, college, economy, education, government, student loans, wall street, Image Direct link: http://www.MyBudget360.com/wp-content/uploads/2012/01/college-tuition.gif

Below is a little artwork I (Editor, Gordon Wayne Watts) made by grabbing a few images and making my own MEME:

The “U.S.A. TITANIC” vs. the 'Icebergs of Overspending'

ver-spending (Crash of the U.S. Dollar) – and skyrocketing tuition (which results when colleges raise tuition because of taxpayer-paid Student Loan subsidies) – Hurts taxpayer – and students – BOTH of these happen when “Liberal R.I.N.O.” (Republican in Name Only) GOP lawmakers – and even more liberal Democrats refuse to grant President Trump's common-sense spending cuts request, documented above. CRASH of the DOLLAR – coming soon to a theatre near you – if

lawmakers don't grant Trump's request. YOU HAVE BEEN WARNED.

You may contact me as follows: Gordon Wayne Watts, Editor-in-Chief, The Register, a Christian and Conservative blog

Flagship mirrors of The Register: http://GordonWatts.com and https://GordonWayneWatts.com G.W. Watts///